Remarks on REBUILD NIGERIA INITIATIVE at the global launch. 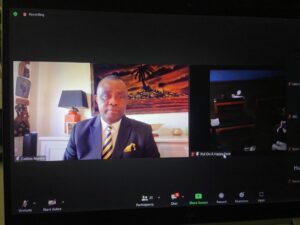 Over the past year, from their back offices, a group of Nigerians have been consulting widely on Nigeria. They talked with compatriots at home and in Diaspora as well as their friends in the international community about reversing the disintegration path that the nation appears to be walking. The outcome of all of these consultations is the formal birth, with the launch today, of Rebuild Nigeria Initiative.

As a group of concerned Nigerians, the intention is to build a global coalition of Non-State Actors with strong determination to:

Conscious of the fact that none of our four-point deliverables is new or groundbreaking in Nigeria and to Nigerians, the difference we seek to make would have to be in how we organise as advocacy group of Non-State Actors. Non-State Activism in itself is not new either. For it to be efficacious for Nigeria therefore, it has to be organised along four broad clusters of organizations and individuals that are not affiliated with, directed, or funded by the Government of Nigeria, which has largely been seen as the spoiler for the country.

Given the multiplicity of the Nigerian developmental challenges, it is value adding for the interests, structure, and influence of the Non-State Actors to be broadly at variance. However they must align in the end goal. An Arewa, Oduduwa and Biafra movement that wants to opt out of Nigeria will seem at odds sitting at the Rebuild Nigeria reconciliation table. It is not! This is because being open to hearing why Nigeria can work again for them and stating their proviso for sustaining the supposed marriage of convenience is a qualifying factor. Non-State Actors encompass NGOs, media houses, financial institutions, business magnates, lobbyists, development partners, paramilitary forces, liberation movements, pressure organisations and religious groups.

Out of this diversity of actors must emerge four strategic clusters for efficiency and delivery:

The Corporate Cluster will include captains of industry who command large wealth, and who often
seek to influence Nigerian national and international affairs. The Dangotes, Otedo Petersides, Elumelus, among others, come to mind. This cluster equally includes multinational corporations that have the impetus to act legally as persons or single entities and are recognized as such in law. They include very large businesses operating out of Nigeria but transnationally. We are looking at the likes of MTN, Citibank, The Coca-Cola Company, Guinness, Nestlé, to name but a few.

The Fourth Estate Cluster will include both conventional and non-conventional local and international media and their agencies. As the interface between government and citizens, the role of the media in providing knowledge about government acts, policies and inefficiencies is cardinal in rebuilding Nigeria. While there are indications of gauging of social media, Rebuild Nigeria Initiative is poised to deliberately embracing it as the Fifth Estate, a socio-cultural player in an evolving democracy, representing outlier viewpoints in a contemporary Nigeria especially bloggers and publishers in non-mainstream media outlets.

The Advocacy Cluster will inevitably include NGOs local and international seeking to effect change in humanitarian, educational, ecological, healthcare, public policy, social, human rights, environmental, and other areas in Nigeria. In the context of present day Nigeria, we are looking at people’s movements with potentials to become influential if they survive State quasi authoritarianism. Groups such as EndSARS are in this league but also the Greenpeace of this world, Red Cross & Red Crescent, Amnesty International, Human Rights Watch and WWF. Nigeria has many unrepresented and indigenous people, often left dangling in nationhood conversations. Goodwill ambassadors including Nigeria’s robust global Diaspora population belong in the advocacy cluster. Some of Nigeria’s Diaspora play major roles in shaping the economy and social imperatives of their adoptive countries and can be a goldmine for Nigeria as Non-State Actors when purposefully galvanised. The Israeli, Irish, Indian and Chinese Diaspora are sources of inspirations for Rebuild Nigeria Initiative.

The Faith Cluster will be as broad as it can get, particularly interdenominational groups and even
traditional religious groups.